Democrats are hoping to retake control of the U.S. House in November’s midterm election. That could mean more female lawmakers sitting in seats of power, including Rep. Nancy Pelosi, who could become the first female Speaker of the House.

WASHINGTON (WOMENSENEWS)–With the passage of the country’s first statewide ban on abortion in South Dakota, the ideological shift to the right of the Supreme Court, and steep funding cuts to federal programs that aid low-income women, 2006 hasn’t exactly been a year of triumphs for women’s rights activists.

But 2006 could end up on a surprising high note for female lawmakers.

For starters, Rep. Nancy Pelosi, a California Democrat who runs her party as minority leader in the House of Representatives, will be poised to become the first female Speaker of the House in history if her party wins control of Congress in the November midterm elections. The position is currently held by Republican J. Dennis Hastert of Illinois.

That a woman is so close to making history–and achieving unprecedented political power–may come as a surprise given the light media coverage of the possibility, said Harriett Woods, a lecturer and author who served as Missouri’s lieutenant governor from 1985 to 1989 and directed the National Women’s Political Caucus, a group in Washington, D.C., that backs pro-choice female candidates.

The dominant news media is “absolutely missing the story,” Woods asserted, noting that it is instead focusing on the possible presidential campaigns of New York Sen. Hillary Clinton, a Democrat, and Secretary of State Condoleezza Rice, a Republican.

“It’s sort of like, ‘Oh never mind, we may have a couple women who may run for president.’ And it’s like, ‘Hello!'” Woods exclaimed.

Aside from a Pelosi coronation, Democratic women are in line to take over a record number of committees and subcommittees if their party wins.

And even if Democrats don’t take control, the pro-choice bloc in Congress may well see its numbers grow this fall, as a number of strong pro-choice candidates–including a handful of women–are working to knock off anti-choice incumbents around the country.

The biggest opportunity for women to gain power comes with Pelosi’s possible ascendance to Speaker of the House, the most powerful office in the legislative branch of government and second in the line of succession in the case of a presidential death.

Before she can do that, Democrats must win control of the House by picking up at least 15 seats, a goal that political analysts say is just within reach. Analysts expect the Republicans to lose between 12 and 18 seats.

Even if Democrats do retake control, Pelosi is not guaranteed the Speaker job. First, Democratic lawmakers must elect her to the post.

If Pelosi does become speaker, she will be responsible for blocking out the congressional calendar, a power that will enable her to set the chamber’s legislative agenda. House Speakers also have at their disposal a number of powers they can use as leverage to build coalitions for the causes they back.

As chair of the party’s steering committee, Speakers also have the ability to dole out committee assignments, which can make or break a lawmaker’s career. They are also able to assign bills to committees and appoint 9 of the 13 members of the powerful Rules Committee, which sets the parameters of floor debate.

“In many ways a woman Speaker will be more important” than a female president, Woods said. “Just think of Newt Gingrich,” she said, referring to the Georgia Republican who became Speaker in 1995. “It’s really the closest thing we have to a parliamentary selection.”

Illustrating the power of the position, Gingrich, along with Hastert, are using the possibility of a Speaker Pelosi as a scare tactic to rally the Republican base this fall.

But it’s not as if Pelosi is the only woman who will benefit from a Democratic takeover of the House. Indeed, four women are in line to take over control of House panels which would give them a record number of committee chairmanships. And numerous other women would be poised to control House subcommittees.

Most significant, New York Rep. Louise Slaughter would likely become chair of House Rules if Democrats retake control. And Rep. Jane Harman of California will be poised to take over control of the House Intelligence Committee, which oversees the intelligence community, a key position in the post-Sept. 11 security environment.

Also, Rep. Juanita Millender-McDonald of California would chair the House Administration Committee, which oversees federal elections and day-to-day operations in the chamber. And New York Rep. Nydia Velazquez would rule the Small Business Committee, a panel of special significance to women because they are becoming independent entrepreneurs in disproportionate numbers.

Achieving more equal representation for women in politics will have an affect beyond simple fairness, argues Debbie Walsh, executive director of the Center for American Women and Politics at Rutgers, the State University of New Jersey.

She cites studies that show that women of both parties not only hold more liberal and more feminist attitudes than their male colleagues but also are more likely to prioritize policies that directly affect women and frame issues in ways that take women’s unique circumstances into consideration.

In addition, women are more likely to work in a bipartisan fashion to advance a collective agenda, studies from the Center for American Women and Politics indicate.

Democrats don’t have to win majority control to increase the numbers of pro-choice lawmakers, a probability in an election year that appears to be shaping up as a bad one for the largely anti-choice Republican Party.

There are currently 232 members of the House who oppose abortion and 201 who support abortion rights or have mixed records on the subject, according to NARAL Pro-Choice America in Washington, D.C., the country’s leading abortion rights lobby.

You would “have to be insane not to be concerned” about the current political environment, said Marjorie Dannenfelser, president of the Susan B. Anthony List, a political action committee dedicated to electing anti-choice candidates to Congress.

A poll concluded on Sept. 19 by the Los Angeles Times indicated that 49 percent of registered voters said they would vote for a Democratic candidate in the midterm elections while 39 percent of voters favored a generic Republican. The poll also showed that 57 percent of voters disapprove of the job done by Congress, which is ruled by anti-choice conservatives.

Dannenfelser said it’s “absolutely possible” that anti-choice lawmakers could lose their majority in the House, which has in recent years enacted a string of abortion restrictions such as laws that make it a crime to injure a fetus in a violent offense and a ban a procedure anti-choice opponents call “partial-birth” abortion.

NARAL Pro-Choice America President Nancy Keenan saw the outlook in a more positive light. The mood of the electorate, she said, will help pro-choice candidates unseat anti-choice incumbents in states such as Iowa, Pennsylvania, Montana, Colorado and Washington.

“The climate in this country is ripe and we are using every tool at every level to help these folks,” she said.

Center for American Women and Politics at Rutgers:
http://www.cawp.rutgers.edu/ 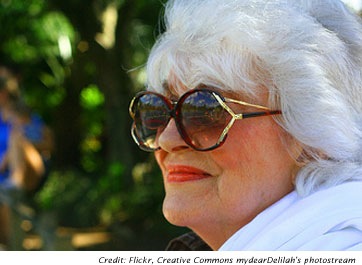 Positive Aging Acts Are Popping Up All Over